Skip to main content
This site uses cookies to provide you with a greater user experience. By using Exceed LMS, you accept our use of cookies.

The Sales Funnel Analytics report provides a view into the success of your sales process. In this report, you’ll be able to:

You can find the Sales Funnel Analytics report one of two ways.

The first way is on the dashboard. Starting on the Home tab, click Dashboard. On the left sidebar, select Sales Funnel Analytics. 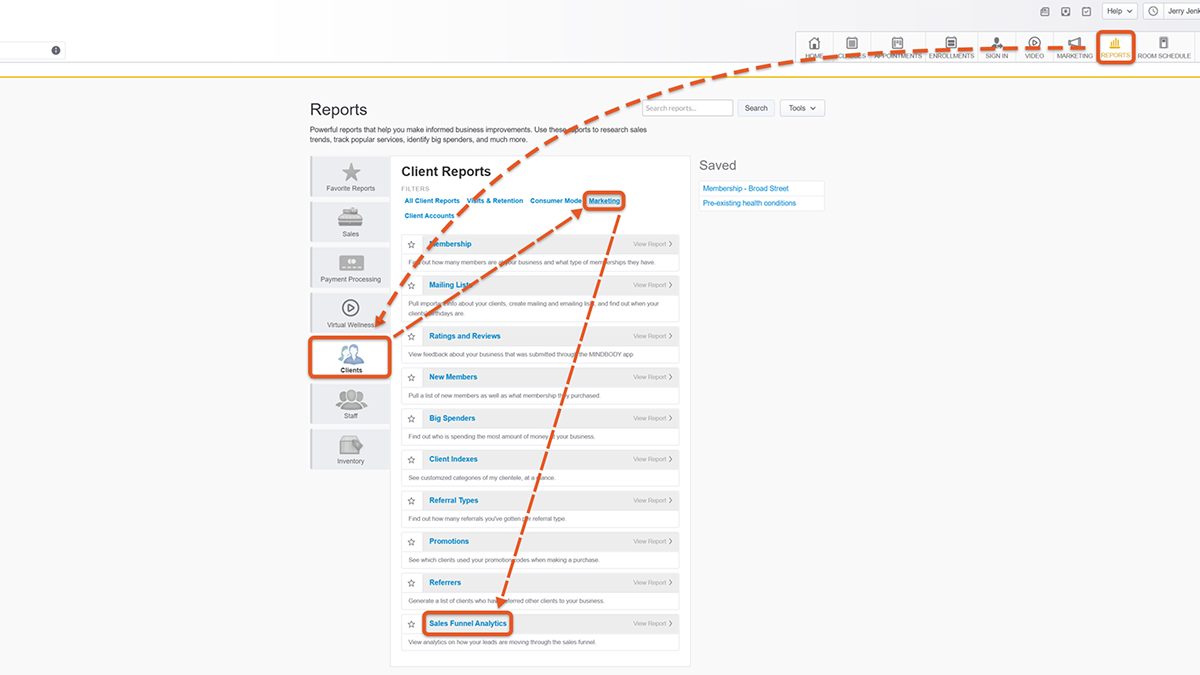 For the other way, open the Reports tab. Click Clients, select the Marketing filter, then click Sales Funnel Analytics.

Before generating the report, you’ll need to set a date range to pull from. You can set the date range for your report by selecting a set range or manually entering the start and end date.

Please note: a lead must have been added to the Sales Pipeline during the selected date range in order to appear on the report. Because of that, we recommend selecting a time frame of at least one month to get an accurate picture.

In our previous lesson, we mentioned how tracking the channel through which a lead first contacted your business can help you determine which lead sources yield the best conversion rate. With the Lead Channel filter, you can limit the report to only show leads from a specific channel. In this case, let’s leave this set to All Lead Channels.

When you're ready to generate the report, click View 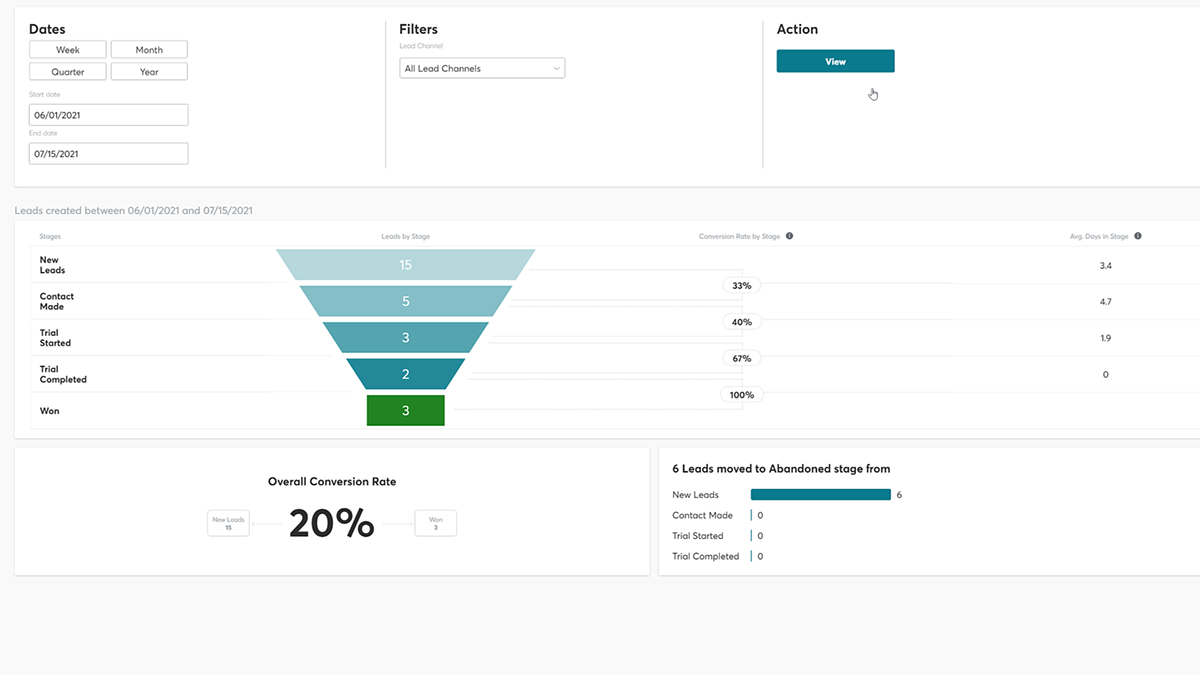 The Sales Funnel Analytics report uses the same stage structure as the Sales Pipeline, but viewed in the form of a funnel. Each stage is listed vertically on the left-hand side of the report, from New Leads to Won. 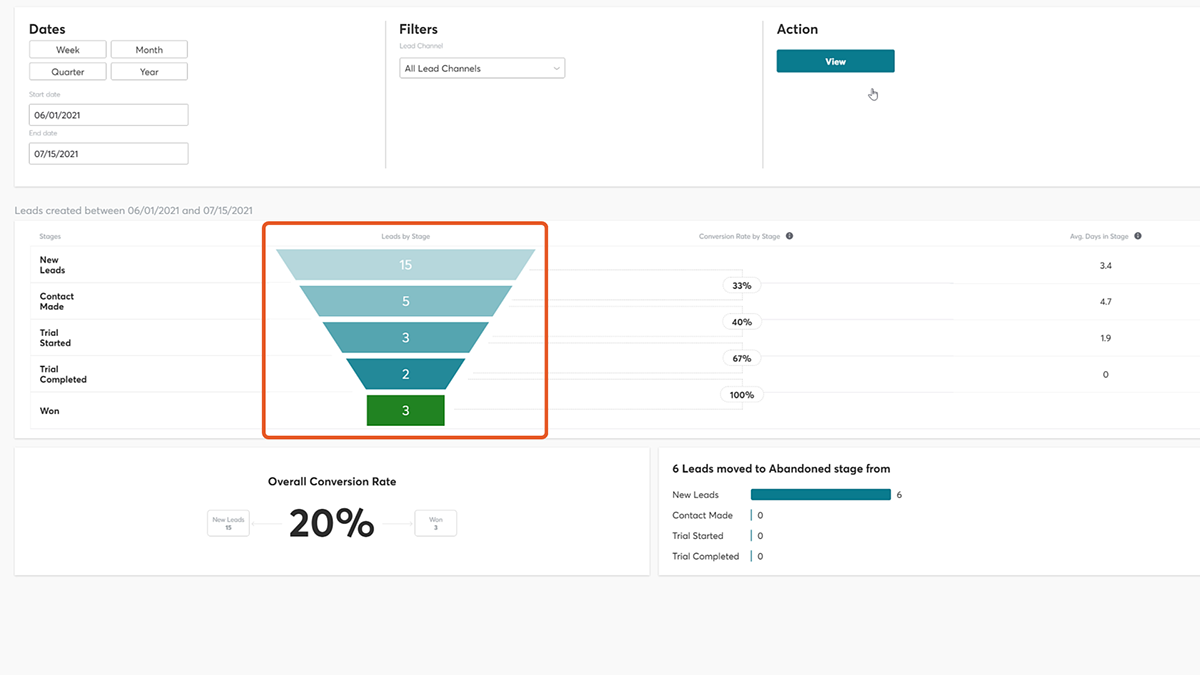 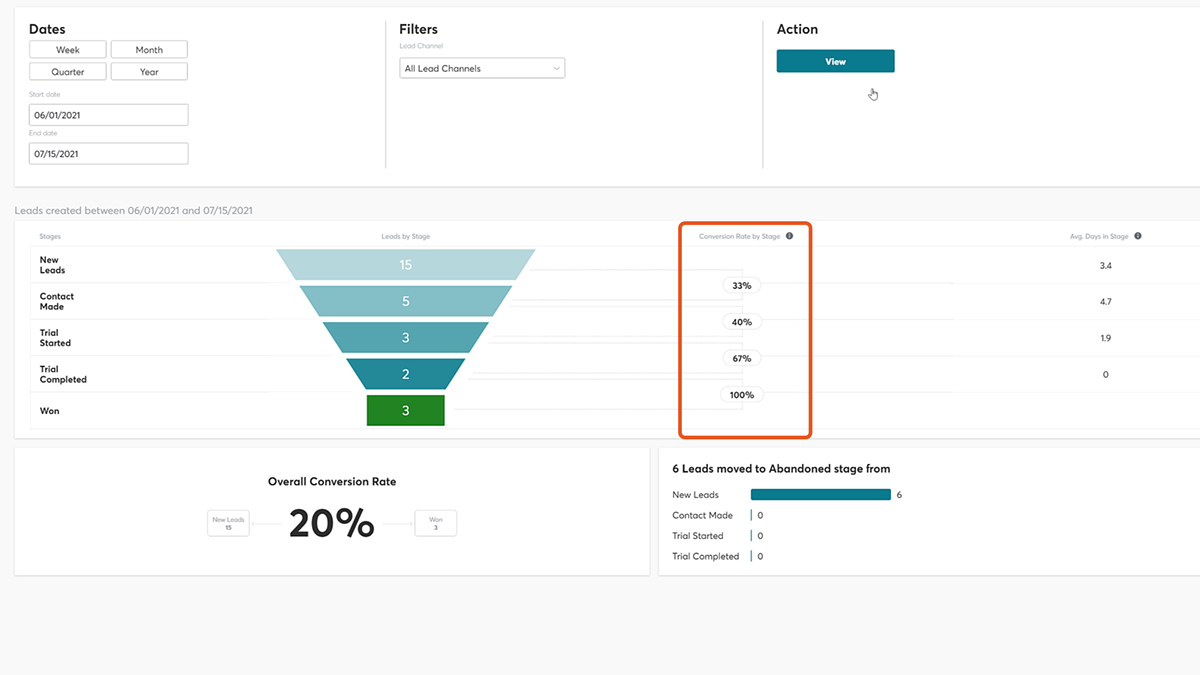 The Conversion Rate by Stage column shows the percentage of leads that made the transition from the upper stage to the lower stage. The stages in question are indicated by dotted lines. Keep in mind: This percentage only counts leads that progressed between the indicated stages. For example, if a lead moved straight from New Leads to Trial Started, they would not be counted in the conversion rate from New Leads to Contact Made. 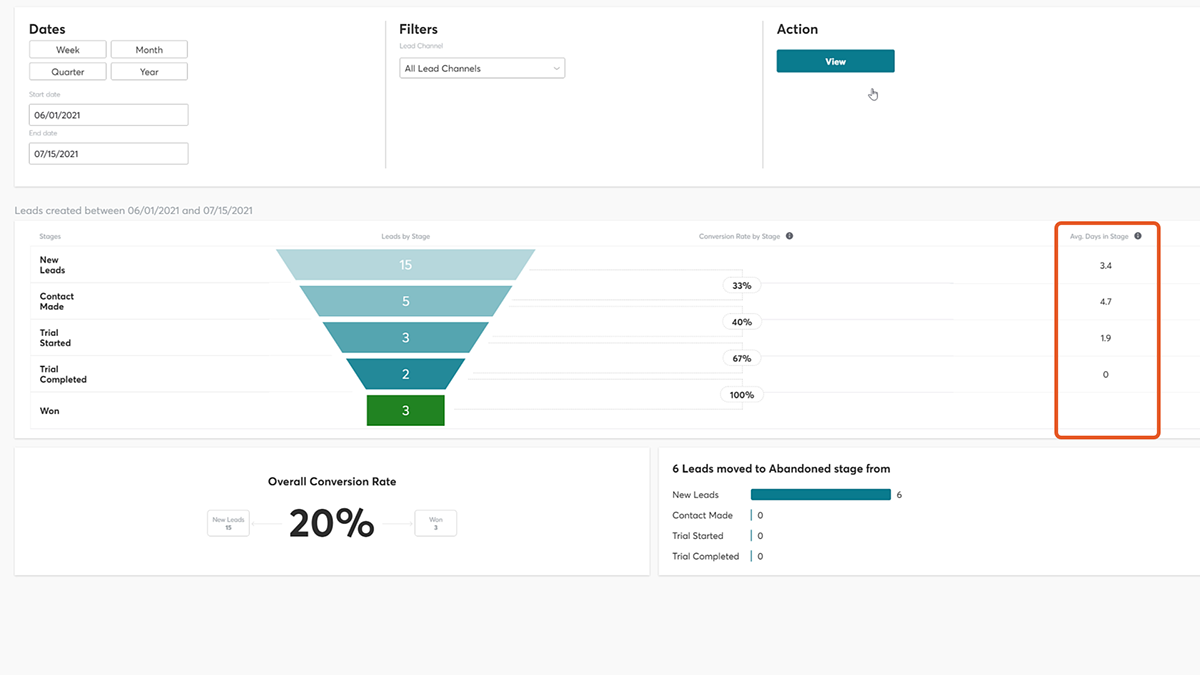 The Average Days in Stage column shows how many days prospects stayed in each stage on average. Again, only leads that were added to the sales pipeline within the selected date range are represented here. 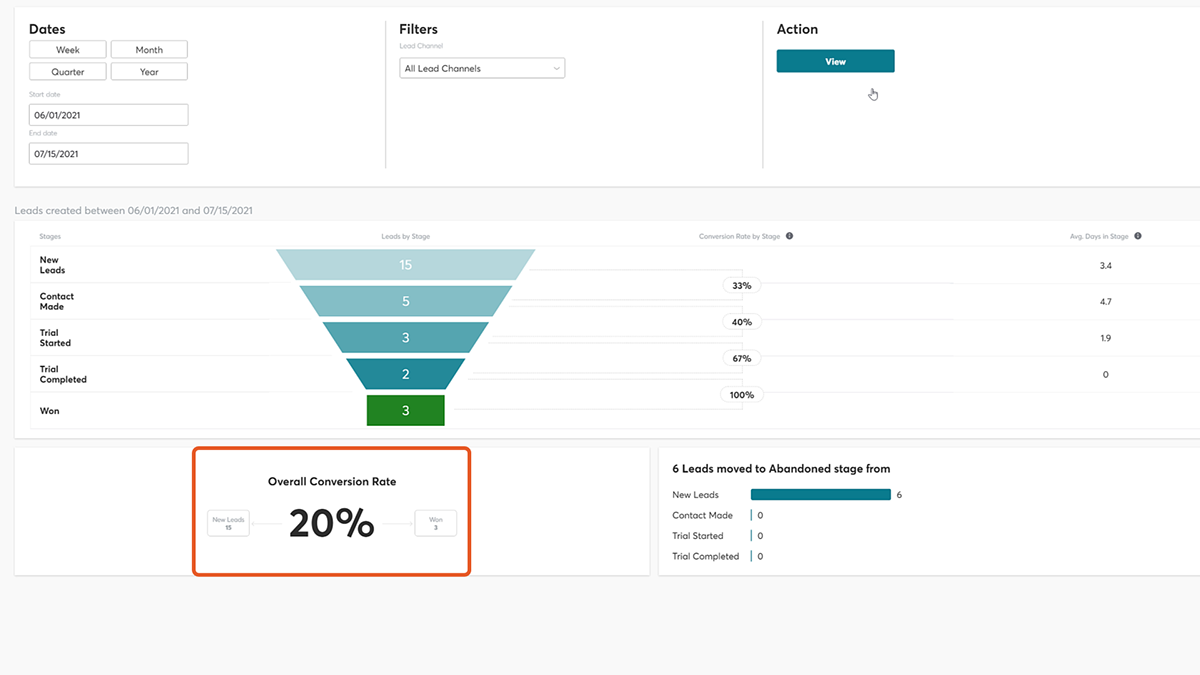 The Overall Conversion Rate is the percentage of leads that were both added to the pipeline and converted to Won within the selected date range. 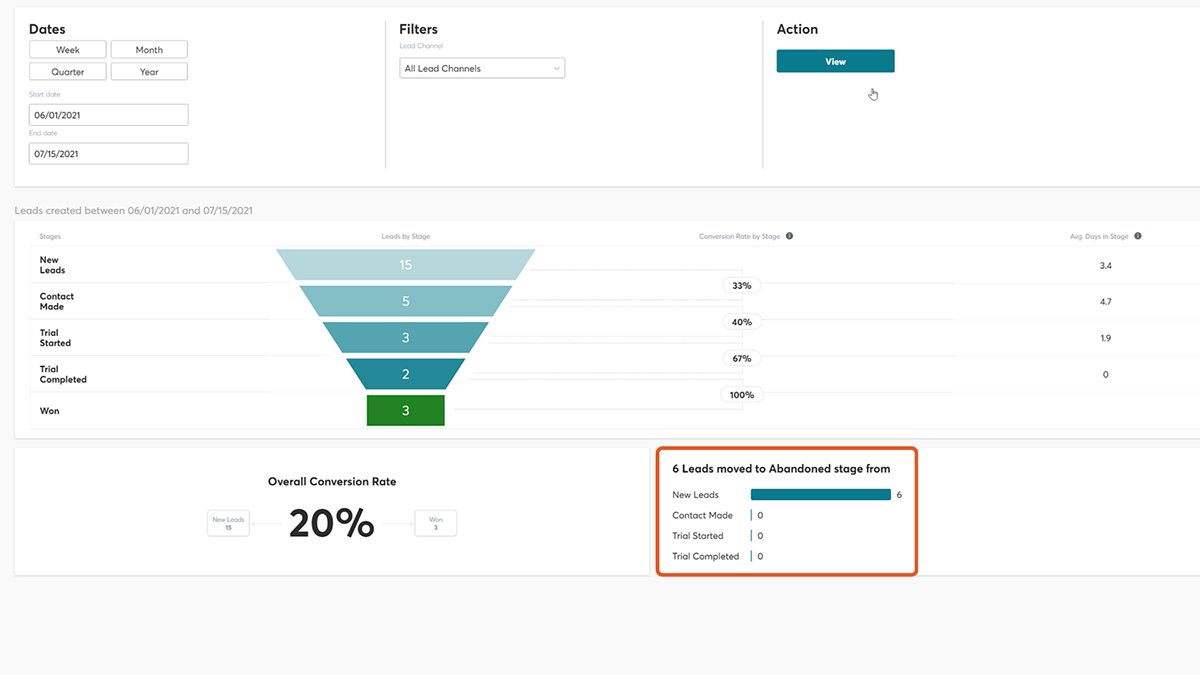 By using the Lead Channel filter, you can determine which channels yield the highest-quality leads.

For example, you might discover that people finding your business via Facebook ads convert at a higher rate than leads from other sources. With that information, you can focus your marketing efforts on Facebook to attract more leads from that source.

By analyzing both the moved to Abandoned stage from and Conversion Rate by Stage metrics, you can see where the sticking points are in your sales funnel.

For example: If prospects aren’t reliably converting from the Trial Completed stage to the Won stage, there may be an opportunity for your business to re-evaluate its pricing structure, the details of your intro offer, or the overall customer experience for leads on a trial.

The Sales Funnel Analytics report gives you the information you need to gauge the efficacy of your sales process and determine which stages of your Sales Funnel need improvement.